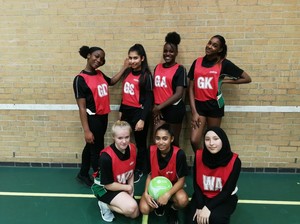 The first quarter got off to a slow start and the score was very close with Mayfield scoring 5 goals and Seven Kings scoring 3 goals.

As the game developed, Mayfield became more settled and made some lovely movements on court to end the game with a win of 17-10 over Seven Kings.

This is a brilliant achievement and it was so nice to see these girls playing a high level of Netball.

A special thanks to Lilly in Year 9 who played up for this game.

Player of the Match was Venise and coach’s player was Khatira.

Written by Miss C Higginson
Back to News ListPreviousNext